Warning Cookies are used on this site to provide the best user experience. If you continue, we assume that you agree to receive cookies from this site. OK

Short history of our company 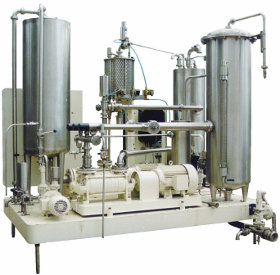 Our company was established in 1986 in the form of GMK (Economical Co-operative) and worked in this form through five years. In 1991 due to development and expantion of proper scope the company required new organizational form and thus it became Ltd. By 1997 the ÉLPAK company had grown so much that it needed to change its organizational form again and therefore from December 1997 it picked up the PLC form. From January, 2000 because of the two profiles the company established two additional individual companies. The PACKER LTD. took over the bottling technological profile while the MEDAQUA LTD. carries out the medicinal and mineral water trade.

In the beginning, the company dealt with repairing, reconditioning and annual maintenance of bottling machines but in the meantime the company's activity expanded. Beside repairing and annual maintenance of bottling machines, the reconditioning of machines and production-lines at the company's main seat came into focus. The reconditioned machines are put back for sale again with garantee. Since 1991 we have developped a bottle washer, a filling and closing machine,rinser-filler-cloxser and filler-closer-labeller triblock machine, a saturator, a labelling machine and tax sticker stamper with an output of 1000-3000 bph. By now the production of tools and parts for these machines is significant. We have been manufacturing bale opener and depalletizer developed by our company since the end of the 90's. The supplied second-hand machines are partly from Hungary but mainly from Western Europe (Germany, Holland, France, Belgium etc.). The marketing of these reconditioned machines is mainly Eastern Europe beside Hungary. The biggest buyer's market is Slovakia, Czeh Republic, Romania, and the ex Yugoslav countries, furthermore North African's countries. The company's main partnership is with Algeria since 1999. Chine was also among the countries where we exported our machines. The secondhand machines are mainly from West Germany which are usuable for decades after reconditioning. We deal with the following manufacturer's product wihtout pretension of the totality: KRONES, NOLL, KHS, SEN, H&K, SEITZ, O+H, KETTNER, WINTERWERB, PERRIER, LANGGUTH, SIMONAZZI, BERTOLASO, ROBINO & GALANDRINO,…etc.